(No, I'm not quitting the job. Don't say things like that!)

Well, it's good news and bad news rolled into one. The bad news isn't really news, though, since we all knew last spring that defenseman Matt Niskanen and forward Mason Raymond were going to turn pro. They bypassed their final two years of college eligibility to do so.

The good news is plentiful, however. 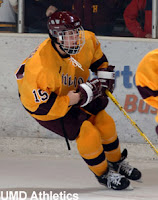 Niskanen, a former first-round pick of the Dallas Stars, appears to have made their opening-night roster. The Stars are in Denver tomorrow night to play Colorado, and Niskanen has a chance to crack the lineup for that game. I say "a chance" because there still appears to be some uncertainty:

The Stars have assigned Conner to Iowa and placed both Niklas Grossman and Mike Ribiero on IR retroactive to their injury dates. They also have placed Nolan Baumgartner on waivers.

They could be planning to put rookie Matt Niskanen in the opening night lineup, but they still have time to make that decision. Because Grossman can come off of the IR at any moment, they could even take him to Colorado and make the decision Wednesday morning whether or not he's ready to play. If Baumgartner clears waivers, they don't need to immediately send him to the minors. They can take him to Colorado, because Grossman is on the IR, and keep him as the seventh defenseman. Or, if Grossman is healthy Wednesday, they can assign him to the minors at that time.

From the sounds of it, the Stars don't necessarily intend for Niskanen to be on their roster all season. It certainly isn't going to work to Matt's benefit to sit in the press box and watch 82 Stars games, though I've heard Willa Ford can sometimes be spotted at home games. As long as husband Mike Modano isn't nearby, that can't be a bad thing.

That said, I'm guessing that the Stars aren't going to keep Niskanen around so he can watch games and stare at Mrs. Modano. If he is ultimately staying in Dallas this season, it's because they think he can play for them.

And in case you're wondering, tomorrow night's game is being carried by Versus live at 9:30pm ET.

As for Raymond, he played well in a cup of coffee with the Manitoba Moose late last year, and most knew that he would be a player to watch in the Canucks' system this year.

What wasn't expected was for Raymond to waltz into training camp and skate away with the coveted third spot on the Sedin twins' line.

But that's exactly what Raymond appears to have done. From the Vancouver Sun:

"Speed is what kills," noted Henrik Sedin, who will centre a line with his brother (Daniel) and Raymond when the regular season opens Friday. "These two guys have a lot more than speed, though. They are really smart hockey players and that's why they're still here."

Head coach Alain Vigneault acknowledged that both Raymond and (former Duck Ryan) Shannon have cracked the top six for now.

However, he did point out that pre-season is not the regular season and performance often changes.

Plans call for Shannon to skate on right wing with Ryan Kesler and captain Markus Naslund.

"The players who deserve to be here are here," Vigneault stated. "Raymond and Shannon have had good camps and they're going to start with us. Now they'll have a chance to prove it in the regular season.

"Raymond was very good in prospect camp and one of the top players there," added Vigneault. "As main camp progressed, he had some good moments and some that were challenging but he's done more good things and that's why he's here and that's why he's going to start with the twins on Friday."

Raymond said what you'd expect him to say.

"Each day is special and I want to concentrate on playing my best. Obviously this was a dream growing up. I am honoured to be playing with the twins.

"They are one of the most dynamic duos in the NHL, so that makes my job easier. I want to use my speed and drive the net type of thing to open up some room for them. When we're communicating and working down low, I think we can be effective."

Obviously, we hope they both can stick in the NHL, but I have to admit some surprise at this news. I figured Niskanen would have a chance to make it up this year, and obviously injuries have played at least a minor role in what's happened to him. But if you would have told me Raymond would get the nod on a line with the Sedin twins on the Canucks' opening night, I would have had your head examined. It's nothing at all against the kid, but I couldn't have imagined he'd round his game into NHL form so quickly.

After a couple rough seasons for UMD, both can be a source of pride for the program and its fans.
Posted by Bruce Ciskie at 2:49 PM