WHAT CHRISTMAS IS ALL ABOUT 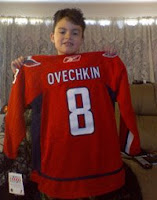 Dude thinks Alexander Ovechkin is the coolest hockey player on the planet, and he was pretty happy to see this jersey in the last box he opened on Christmas morning.

Obviously, not everyone on the planet has kids, but it's an incredibly rewarding experience, especially on days like this.

I hope you all had a wonderful day.

Me update. Things are good here. As you can see to the right, I've been quite busy at FanHouse. I'm also blogging now at College Hockey News, though I've been dormant there for like a week now. Thanks to all for their kind words and such over the last 15 days. Yes, it's been that long.

I'll effort to give you more updates on this blog as we move forward. Here's a quick couple of thoughts for now.

McHale's team stinks, too. Granted, they've played some pretty tough competition. But the Timberwolves have yet to win for Kevin McHale, and I don't think it's a coincidence. The team just isn't very good. Whether it's free throws, three-pointers, ball protection, or defense, there just seems to be at least one thing at any given time that this team is really bad at. That's what gets you to 4-19.

Well, that and losing by 20-plus points to a wretched team like the Clippers.

Gaborik is coming! It's about damn time. My update on it for FanHouse can be found here.

Honestly, the Wild have looked as bad as ever in the last five games. They're not scoring, and the defense is horrifically leaky. No, they're not giving up a ton of goals, but they are yielding way too many shots. With Gaborik returning to the lineup Wednesday, you can expect to see part-time forward Brent Burns move back to defense. Burns came to the Wild as a forward, and they made a really good defenseman out of him. He played well up front, but I look at it as akin to the Packers moving Charles Woodson to safety.

It filled up one hole, but it created another one. And in both cases, the hole created may have been more significant than the one filled.

Speaking of the Packers ... It just wasn't meant to be, I guess. The Packers won't go to the playoffs, and in the end, it might not be a bad thing. This isn't a veteran team taking their last shot together and experiencing failure. It's a young team that has its best years in front of it. That has to be encouraging for Packer fans.

This fanbase is wonderfully spoiled. The Packers have posted exactly two losing seasons since 1992, by far the best mark in the NFL.

There are two games left, and I hope the Packers are smart enough to at least use some of that time to see what can be done about gaping holes on the offensive line and some underachieving players on defense. There should be no shortage of motivation, with a chance to spoil the Chicago Bears playoff chances Monday night, followed by the currently-winless Detroit Lions. If the Lions show up at Lambeau 0-15, there's no way the Packers can afford a loss. That's the wrong kind of history.
Posted by Bruce Ciskie at 7:15 PM 0 comments

BREAKING: WITTMAN OUT, McHALE IN

Wait. This has happened before.

Kevin McHale is the new coach of the Timberwolves.

If anything, there is at least one piece of good news that comes out of this. As he takes over the coaching gig, McHale is giving up his front office job.

FanHouse colleague Tom Ziller points out that Wolves owner Glen Taylor seems to have an affinity for firing ineffective coaches, but he has no problem continuing to employ an ineffective club executive in McHale. Perhaps if McHale is as ineffective as a head coach as he was in the front office, this will be the last straw for his Timberwolves reign.

We can only hope.

Of course, one could argue that it would be hard to look worse as a coach than Randy Wittman did. He was always a solid assistant in Minnesota under Flip Saunders, but any coach could look good when he had Kevin Garnett to work with.

I still like the Mayo trade, but the Brandon Roy deal was a disaster, and Corey Brewer may never develop (he's out for the year with a knee injury).

Taylor and McHale will address the media this afternoon, but Taylor does make it sound like McHale is toast if he doesn't turn this around.

"There were certain goals and expectations that we had for this team at the start of the season and we have not lived up to them," Taylor said in Monday's statement, after proclaiming Wittman safe roughly two weeks ago.

"I am disappointed in our record and believe that we have more talent than our record indicates. A change had to be made and, with three-fourths of the season remaining, there is still time to make substantial progress this year. ... Kevin has assembled the players on this team and believes in their talent and skill level.

"It is my expectation that Kevin will be able to get the most out of our team and our players in his new role as head coach. He has been involved in the NBA game for almost 30 years, is a tremendous teacher and has a wealth of basketball knowledge. I am confident that our players will respond to the new voice and perspective that Kevin will provide."

Good luck, sir. Getting this team to not suck is much easier said than done.

The defense has alternated between mediocre and dreadful (they've allowed 47 percent shooting for the year, and over 100 points per game, ack), and the Wolves just don't have enough guys who can score, especially off the bench. Mike Miller is shooting well but not often enough, and Rashad McCants is shooting too much.

McHale's specialty is post play, so maybe a new voice will turn around the Wolves' defensive work and give them a more physical presence on both ends. They need it.

Believe it or not, 4-15 isn't as bad as it could be. It's McHale's job to make sure things don't get any worse.

Not helping matters: Minnesota is near the bottom of the NBA in attendance, drawing under 14,000 a game (and that number is probably inflated).
Posted by Bruce Ciskie at 12:32 PM 1 comments

The 25th position is a throwaway. I had no inkling of who belonged, but I had a good feeling who didn't.

Dropped Out:
Posted by Bruce Ciskie at 9:56 AM 0 comments

It regrets me to inform all of you that, effective today, I am no longer employed by Midwest Communications.

The last 12 years have been fun, exciting, and without very many dull moments. I have no regrets, except that I will no long be able to work with and for many people I respect so much.

With this, my time as the "Voice of UMD men's hockey" has come to an end. I want to thank all the fans and parents and families who have supported me over the years. I also want to extend my best wishes to the players, coaches, and support staff I leave behind. It was truly an honor to work with all of them, and I will miss it a great deal. I'm sure I'll see many of you at the rink, as I intend to catch as many games as I can.

Please feel free to contact me via e-mail at bciskie@gmail.com. Thanks again for all your support in all my radio endeavors.

I don't know what the future holds, but I embark on the future with my head held high. Happy Holidays to all of you and your families.

This will serve as my only public comment on this situation, though I will keep you posted about my future.
Posted by Bruce Ciskie at 7:16 PM 11 comments

Sorry for the lack of posts lately.

Good news is that my post volume is likely to rise in the near future.

Bad news? Well, I don't want to get into it right now.
Posted by Bruce Ciskie at 11:43 AM 0 comments