It's Official: The Brewers Suck 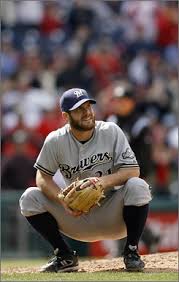 I haven't seen anything like this in a long time.

As a lifelong Brewers fan, I've seen a lot of bad, bad baseball. Most of the Phil Garner era would qualify, and that Davey Lopes-led disaster is on the list.

But what we've seen in the last four days is off the charts.

The Brewers have lost three of their last four, and they've been spectacularly bad in doing so. Things have gone so poorly that the team had to lean on a guy who hadn't won a major league game in three years to win them a ballgame.

Outside of that, nothing.

In fact, this is worse than nothing.

Establishing a new low point in an already discouraging season, the Brewers were crushed, 15-3, by the last-place Pittsburgh Pirates at PNC Park, with left-hander Randy Wolf getting pummeled for 13 hits and 12 runs in 5 2/3 innings.

... The one starting pitcher not ravaged over the last four games, Chris Capuano (one run in five innings on Monday), was subsequently removed from the rotation. That’ll teach him to be effective.

For a historical perspective on the awfulness of the Brewers’ pitching this week, the Elias Sports Bureau confirmed that no major-league team had three starters allow at least 10 runs over a four-game span since the St. Louis Browns in July 1937. Manny Parra, Dave Bush and Randy Wolf, meet Oral Hildebrand, Elon “Chief” Hogsett and Jim Walkup.

Perhaps it was karma that the Browns originated as the Milwaukee Brewers of the American League in 1901.

Seriously. It's that bad.

Wolf was a colossal waste of money. It's hard to question the signing, because this team's pitching was so bad a year ago. However, one has to start to wonder if the Brewers would have been better off rebuilding from scratch with the pitching staff.

At no point has it looked like the Brewers were capable of winning with the team they have in place. This team has been pretty awful from the get-go, and if they're not going to get any better very fast, it's time to talk trades.

I'd say Doug Melvin might as well start burning the phones. It's time.
Posted by Bruce Ciskie at 3:52 PM

The only phones Doug Melvin should be manning are the ones calling the unemployment office.