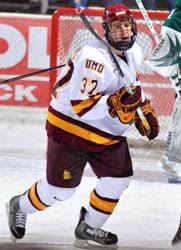 During the summer, NHL teams have a chance to host top prospects for developmental camps. This is not just a shot for teams to see what their draft picks can do, but it also gives them an opportunity to bring in top college free agents.

The players are not paid to take part in the camps, so guys with remaining NCAA eligibility don't have to sacrifice that to take part in a camp. It's a no-lose, because they can be seen by NHL teams and scouts, get pointers from coaches, and get a better idea what part of their game needs improvement so they can get a pro contract at some point.

Justin Fontaine has played three years at UMD. In 117 games, he has 40 goals and 106 points, numbers that become even more impressive when you consider that he had just four goals and 12 points as a freshman. In 82 games since, Fontaine has accounted for 36 goals and 94 points, a very impressive pace that he should be able to add to as a senior for UMD.

Fontaine was in the Twin Cities this week, taking part in a prospect camp for the Minnesota Wild. He is one of many current and future Bulldogs who are skating or have skated in NHL camps this summer.

Saturday, Fontaine scored twice in the first of two scrimmages the prospects are playing. The second will be Sunday at 11 a.m. in St. Paul, and is open to the public. Fontaine is joined at this camp by Bemidji State star Matt Read, among other college hopefuls.

"It's been a great experience so far," Fontaine said. "They treat you well. You just have to try and ask a lot of questions to the guys that have been to these."

There is little doubt Fontaine will receive an opportunity at a professional contract following his senior season. He's scored more than 40 points each of the last two seasons and will likely be a first team forward selection in most preseason WCHA polls.

"I want to get faster and just improve in all areas of the ice," Fontaine said. "I want to work on everything and hopefully it will show when I get back to Duluth."

Yes, this is supposed to get you at least a little excited for Bulldog hockey, even though it is still many days away. Fontaine is going to be part of one of the nation's more lethal offensive attacks, joined by the Connollies, Travis Oleksuk, a ready-to-make-The-Leap Mike Seidel, senior Kyle Schmidt, and grinder David Grun, among others.
Posted by Bruce Ciskie at 8:49 PM