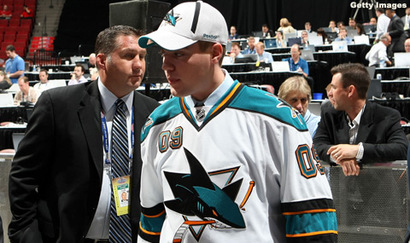 The major junior ranks might not have been the preferred destination for former UMD defenseman Dylan Olsen, but they'll work just fine for William Wrenn.

The Denver sophomore, a high draft pick of the San Jose Sharks in 2009 and a product of the U.S. National Team development system, has decided to leave school and move on to the Western Hockey League's Portland Winterhawks.

CHN quotes longtime Denver coach George Gwozdecky, and it's about as short and precise as Gwoz will ever be quoted.

“William has decided to leave our varsity hockey program and concentrate full-time on his hockey career,” Gwozdecky said. “William feels he will have a better opportunity to play on a regular basis and contribute in a more important role at the junior hockey level. He was a good teammate and was well liked in our locker room. William will be missed by our program.”

That's a solid, high-road response from the coach.

This isn't about Wrenn developing more quickly in the WHL, and there are no rumblings at this point that this departure is related to academics.

Instead, it's time, Wrenn has apparently decided, for a change of scenery. In 41 games at DU, he notched just eight assists, including one this season in 18 games, tying him with freshman goalie Sam Brittain on the team scoring chart.

Looking at Denver's lineup from their weekend games against Northern Michigan, it appears Wrenn was relegated to the role of seventh defenseman (DU dressed 11 forwards for each game). The continued improvement of John Lee, the emergence of freshman David Makowski, and the continued play of sophomore Matt Donovan made it tough for Wrenn to get a lot of minutes on special teams, and he was struggling to earn more ice time with the Pioneers.

He'll be a welcome addition for a Portland team that is looking like a strong contender for a spot in the Memorial Cup this May. However, with three defensemen possessing double digit plus-minus ratings, and two blue-liners at or over 20 points for the season, Wrenn might struggle for minutes in Portland the same way he did in Denver.
Posted by Bruce Ciskie at 2:26 PM