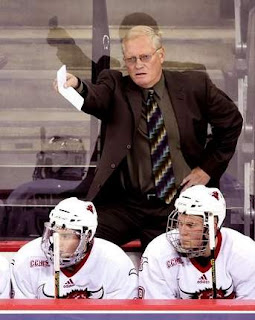 HOUGHTON, Mich. -- Friday night didn't include many surprises in the WCHA. The surprise we saw was a biggie.

While UMD and Denver took care of business in their league games, North Dakota got thrashed around the waves at Ralph Englestad Arena.

Doing the thrashing? Dean Blais and his Nebraska-Omaha Mavericks.

UNO scored on their first five power plays, threw in a first-period shortie, and ended up with an 8-4 victory that lacked a lot of drama.

The Sioux tried to rally in the third period, cutting a 7-1 deficit down to 7-4, but Blais called a timeout, and Joey Martin iced the game for the Mavs.

It was a game that saw the same kind of rash of penalties that overcame UMD last Saturday at Amsoil Arena against Wisconsin.

One of the referees that night? Brad Shepherd.

One of the referees Friday in Grand Forks? Brad Shepherd.

Anyway, UND was uncharacteristically bitten by penalties, calls that captain Chay Genoway wouldn't put on the officials. Since I'm in Houghton, I won't see the game until Sunday, so I can't help you on the particulars.

For now, I'll leave you with a few thoughts.

******
UMD did exactly what they needed to do. They got their legs and kept Michigan Tech off the board in the first, then jumped on the home team in the second, and were not threatened after that.

It wasn't pretty in the first, as Tech played their game very well, keeping the quality chances away from goalie Kevin Genoe. It was almost a rope-a-dope strategy, with the hopes UMD would get frustrated or otherwise knocked off their game.

Like they did in earlier series against Providence, Alaska-Anchorage, and Michigan Tech, UMD kept to their game, didn't waver from the game plan, and eventually overwhelmed their opponent. They did it with some great passing, hard work along the boards, and the underrated ability of guys like Justin Fontaine and Jack Connolly to get open when everyone should be watching them.

By my count, Tech had all of five shot attempts in the prime areas around the front of the UMD net. On those five attempts, Kenny Reiter had to make all of one save. If you're someone who wants Michigan Tech to end their 19-game winless streak on Saturday, this is the first and most important thing that has to change. If the Huskies can't or won't get to the front of the net, they won't score.

When killing penalties, UMD did a good job of keeping everything on the perimeter and blocking shots before Reiter had to stop them. All in all, he probably played more pucks outside of the crease than he did inside. It's a recipe for UMD success, for sure.

You might argue here that Tech is hardly an opponent for UMD to play against and end up looking good, but considering their past history with the Huskies, a season sweep is a huge accomplishment. It's also a message to the rest of the college hockey world that this speedy, skilled UMD team can play the hard-nosed, grind-it-out style of hockey and be just as successful in that style.
Posted by Bruce Ciskie at 10:07 AM