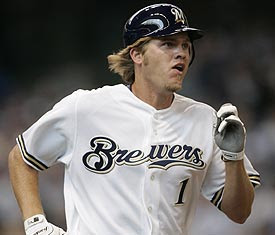 For some reason, this rubbed me the wrong way Friday morning.

Milwaukee Brewers outfielder Corey Hart, by all accounts a pretty decent guy, and probably best known for letting his daughter get beer dumped on her after he was named to the 2008 All-Star Game, took his team to an arbitration hearing this week.

This is not a crime, and no one is looking down on Hart for fighting for the salary he feels he deserves. Yes, it's Monopoly money, but they have a right to get what they feel they have coming to them.

Last year, Hart was terrible. His average slipped, he couldn't hit consistently, he didn't generate much power, had a poor year of run production, and was injured for a time.

Despite the fact that arby hearings usually boil down to comparable players and not so much individual performance in a single season, it made sense that Hart would fail to win his arbitration hearing.

Give both sides credit. You figured the Brewers wouldn't have any hard feelings about the deal, but Hart was extremely classy in victory.

When told there was some fan backlash over his big raise from a $3.25 million salary after an off year, Hart said, "That's just one of those things you have to deal with. I didn't have a good year last year. I'm sure they don't think I deserved a big raise.

"I've just got to win them back over. I always play hard. I'll try to put up good numbers and get them back on my side."

Asked if the big salary puts more pressure on him, Hart said, "I don't look at it as pressure. I always want to do my best. I want to prove that I'm a better player than I showed last year. I want to be a big part of this team and do everything I can to help us win."

While it irked many Brewer fans that Hart sought such a big raise, it's heartening that he seems to understand why that is. If Hart follows through on his pledge to prove that he's a better player than the .260/.335/.418 he put up last year, he could be in for a huge 2010.

If that happens, he probably won't have to worry about his salary for a while.
Posted by Bruce Ciskie at 11:01 AM

It was very nice blog and got lots of information .Thanks