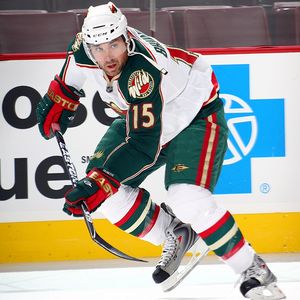 This post isn't about gay marriage. It's more about free speech, and the consequences that can be had when we exercise that right.

You may remember the flap created when New York Rangers irritant Sean Avery did a spot where he spoke out in favor of gay marriage.

Avery caught some heat for the spot, but for the most part, he was applauded for speaking out.

The sports agency, run by Don and Todd Reynolds, represents a number of NHL players, including (soon to be former) Wild forward Andrew Brunette.

Very sad to read Sean Avery's misguided support of same-gender "marriage." Legal or not it will always be wrong.

We haven't heard much from Uptown Hockey's clients since this happened, but Brunette has (quietly) made his thoughts known.

According to Michael Russo, Brunette fired Uptown Hockey and hired new representation, citing the Avery controversy as his reason for the move.

No one is saying that the family Reynolds didn't have the right to speak out on the issue. Certainly, they had as much right as Avery did.

When Don Reynolds, Todd Reynolds, or whoever posted that tweet hit "send," there was a part of them speaking not just for themselves, but also "on behalf" of their clients. For some, the words of Uptown Hockey -- unchecked -- are also the words of those Uptown Hockey represents.

Obviously, Brunette felt this way. Either that, or he agrees with Avery, and wasn't about to compensate Uptown Hockey for helping him agree to a new contract in free agency this summer, when their feelings on this issue are so different.

No matter what, Brunette should be applauded. Uptown Hockey didn't take into account the impact these words would have on others when that tweet went out.

Now, in a small way, Brunette has made them pay the price.

(Tap of the stick: Hockey Wilderness)
Posted by Bruce Ciskie at 7:54 AM